skip to main content
Return to Fordham University
You are at:Home»Arts and Culture»Artist Reveals Unseen Spaces in his Works 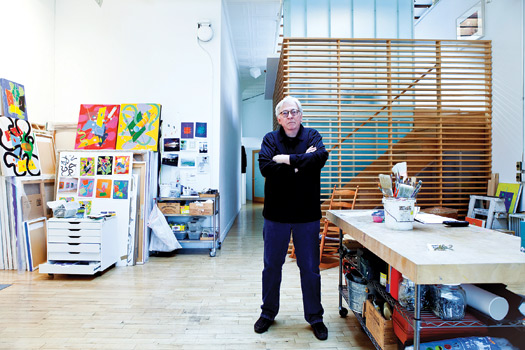 William Conlon, pictured in his Soho studio, aims to tap into viewers’ subconscious with his art. In the background are pieces from his Collider series.
Photo by Gerald Foster

The world is a complex place. William Conlon believes his art should reflect that.

Conlon, a professor of visual arts since 1979 and the director of the visual arts program until 2005, strives in his work to show how abstraction can show aspects of the world we live in that cannot be shown through realism or traditional, realistic paintings. Instead of words, shapes and forms are the language of his work.

They’re not illusions, though. Conlon prefers to think of them as works that “flip and flop on you.”

A classic everyday example of this flip-flop phenomenon is the FedEx logo. People who are purely verbal, Conlon says, do not see the subtlety of the logo, which contains a beautiful arrow between the lettering. In perceptual psychology, this is called a subjective contour.

“When you see it, you’ll never forget it, and it’s something I use to play a game with my students. The arrow is there, but it’s subconscious. Just like in my work, you don’t see it, but its there.”

For over 40 years, from his studios in New York’s SoHo and in Maine, Conlon has crafted several series of works, from Einstein’s Waltzes to the Great Diamond series, the latter named for the island where his Maine studio is located. His paintings have been exhibited in major galleries and museums throughout the United States and Europe. 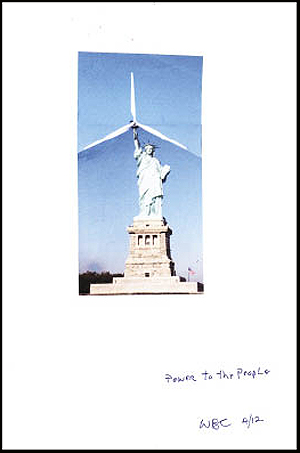 Conlon’s rendering of his class’s idea.

He’s currently working on the Collider series, which he started three years ago. Each piece takes three to four months to complete, and is first laid out as an 8.5-by 11-inch pencil sketch before being blown up to a larger scale, where he adds colors.

Conlon will be taking a sabbatical in Italy in January to study the master painters. In the meantime, he’s teaching drawing and collage at Lincoln Center and painting at Rose Hill. Teaching, he said, informs his own work, such as when he discusses with students the concept of visual metaphor—something that explains a construct or an idea visually.

“We got to talking about the environment in a class recently, and how this country is stagnant in its ability to deal with global warming and efficient energy,” he said. He then asked the class what would be a good visual analogy for the concept, that would make sense to the greater public.

The answer students came up with was the idea of the Statue of Liberty holding up a modern windmill instead of a torch.

Teaching art as part of a liberal arts curriculum to a student population that increasingly hails from outside the United States provides challenges that Conlon relishes. Trying to explain the significance of Andy Warhol and the Pop Art movement to a student from Beijing, for instance, is tough. One student from China who struggled with art history comes to mind.

“I said, ‘Where would you go if you wanted to learn about fish? You go to a fish market, look at the fish, and ask them, ‘what’s that fish, what’s this fish?’ ‘That’s a lobster, that’s this, that’s that.’ You’ve got to go to a museum and start walking around on your own.’ This kid has had an epiphany, because she’s walked into the museum on her own terms, and she’s had to deal with what she’s looking at,” he said.

“That, to me, is what great teaching is about. It’s not about anything creative I do personally; I’ve just helped a kid learn on their own.”

Conlon is proud that—some 33 years after coming to Fordham, when the department consisted of him and a few adjuncts—the visual arts curriculum is firmly established here. There are now 11 full time faculty members, eight adjuncts, and several work and display spaces at both the Rose Hill and Lincoln Center campuses. The number of student fine arts majors is approximately 100 annually.

“We have kids who have graduated in the last 10 years who are working in Williamsburg and struggling, and not going down to Wall Street,” he said. “They’re trying to make art. I’m excited about that.”