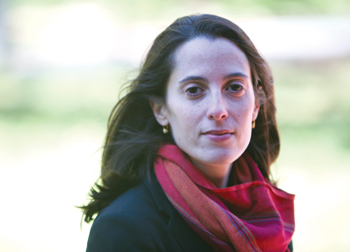 Susanna McFadden, Ph.D., is conducting research during her sabbatical at the University of Pennsylvania Fine Arts Library.
Photo by Tom Stoelker

Subtlety and contrast seem to have equal pull on Susanna McFadden, Ph.D., an art historian specializing in the late Roman world. Her recent research of Roman frescos at the Luxor Temple in Egypt incorporates both.

The striking visual contrast between Roman frescos and Egyptian hieroglyphics in the temple does little to distract McFadden from discerning nuanced narratives in the details of a single scene.

McFadden is currently co-editingThe ‘Art’ of Maintaining an Empire: Roman Paintings in the Temple of Luxor, to be published in 2013 by Yale University Press.

The Luxor Temple was built in the 14th century B.C. in ancient Thebes. During the late third and early fourth centuries A.D., the Romans made their mark on the site through a series of architectural interventions. As the temple was initially created to honor the Egyptian pharaoh as a god, the Romans appropriated the space to venerate their own emperors. Inside, engineers restructured the space so that the sight lines would lead visitors’ eyes toward a huge niche where larger-than-life frescos depicted the Tetrarchs—the four Roman rulers of the time.

To fully understand ancient perceptions, McFadden said, today’s viewers need to discard contemporary conceits about art as something personal and self-expressive, to see it as something public and communal.

“People were illiterate, so an image had a much bigger impact than today,” she said. “We’re so inundated with images that it’s hard to understand the power they once had.”

Another contemporary challenge to understanding the frescos comes from scholarly biases that privilege the evidence of ancient texts over material culture. The concept of an image providing an alternative narrative to a text is one that McFadden returns to frequently. She recently completed writing “When Image Divorces Text: the Late Antique Megalographia from the so-called Domus Faustae in Rome.” It will be published next year in the journal Memoirs of the American Academy in Rome.

“We want to understand the image, so we look in the ancient text for clues, but the truth of the matter is that hardly anyone wrote about art, or the meaning of an image,” she said. “Nobody wrote ‘I was walking through the Forum today and saw this image of Caligula and it made me think he was all creepy.’”

She added that the contemporary viewer needs to realize that what might appear creepy today might have been perceived quite differently in the past. Viewers should be careful when trying to reconstruct ancient responses to images.

In the case of the Tetrarchs frescos, much can be gleaned in spite of these caveats. The Romans placed the paintings of the Tetrarchs in the context of the original pharaonic architecture. They rearranged the architecture so that visitors were forced into a procession toward the frescos, where they were “majestically confronted” with the images.

The faces of the four rulers in the frescos were faded or destroyed over time. But by looking at the overall image program developed throughout the empire, McFadden said the Tetrarchs were often made to appear identical, to portray the notion of “concordia,” meaning equality.
But “concordia” was more an ideal than a reality. The fresco details reveal a “damnatio memoria” of one Tetrarch, whose image was literally erased in antiquity by the three other rulers after he was murdered.

McFadden also noted the images are approximately one-and-a-half times life size and are situated high above eye level. This differs greatly from early in the empire, when the emperor was portrayed in a more approachable manner.

The shifts in the portrayal of power—from approachable to divine—coincided with a more remote style of leadership that was less in touch with the common people. This type of leadership, she said, precipitated the decline of the empire.

“It’s hard not to think about the transition between the late classical world and the transition to the medieval world and compare it to today,” she said. “In the cities of the late Roman world you had an elite class eschew civic responsibility. Where there were once public benevolences of grain or bread, there was suddenly none. Sounds a lot like some of the issues critical to the recent election, no?”

McFadden said that the Tetrarchic era analysis was inspired by a conservation project sponsored by the American Research Center in Egypt and USAID that was completed in 2008, before the political strife arose in Egypt. For a short period, she even lost contact with the co-editor of her book project, who resides in Egypt.

With the dust still settling on Egypt’s Arab Spring, another regime change may prove one more corollary to Luxor.

“Permission to work at certain sites is no longer guaranteed for scholars because the Antiquities Service in Egypt is under ‘new management,’ so to speak,” said McFadden.

And yet, as the faded Roman frescos at Luxor attest, Egypt has a rich history of weathering regime change.