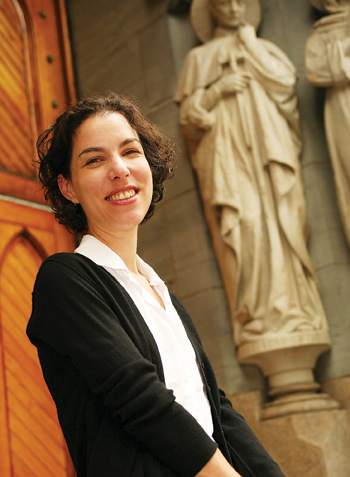 Nina Rowe , Ph.D., knew exactly where to take visitors when she gave a tour at the Metropolitan Museum
of Art on March 2.

Sitting in the museum’s Medieval collection is a 14-inch-high statue of the Virgin Mary, carved from oak and gilded. The piece, which dates to 14th-century Germany, is a rare devotional shrine that from the outside appears to be merely a statuette of the enthroned Virgin Mary nursing the Christ Child.

But when it is opened, the “Vierge Ouvrante,” shows a sculptural representation of the Trinity (sans the figure of Christ and the dove of the Holy Spirit, which were lost), mystically revealing that salvation is achieved through Christ incarnate.

It’s an example of an impressive collection of pieces from the western Medieval and Byzantine era at the Met. Although the Cloisters in Upper Manhattan is well known among art aficionados for its Medieval collection, Rowe said that the main collection of the Metropolitan has equally outstanding holdings dating from the fifth through the 15th centuries.

Every semester, members of Fordham’s art history faculty lead tours through various galleries at the Metropolitan Museum from the Greek and Roman collection, on up to the Modern wing. This spring, Rowe, an associate professor of art history, and five other members of the Fordham faculty will lead six different tours at the Met.  The tours take place Fridays at 5 p.m. through April 27, and are open to the entire Fordham community for a nominal $2 admission fee.

“My greatest challenge is getting students to get in close,” Rowe said. “Students seem to be scared of putting their noses up against a case, or coming as close as possible to a sculpture that’s not behind glass. I always have to do a lot of work to get people to come in close and really look, because it’s only when you get in really close that you focus.”

The annual tours began in 2004. Jo Anna Isaak, Ph.D., the John L. Marion Chair in art history, said they’ve become a hit with those looking for something different to do on a Friday afternoon.

“I’ve noticed a lot of the students aren’t necessarily art history majors, and are in other fields altogether,” she said. “This is a chance for them to have somebody who’s a little more intimately connected because it’s a Fordham faculty member, so they feel better about going to a talk by them. They can ask questions of that person, perhaps more easily. The Met does give its own tours, and they’re excellent—but this is just for Fordham.”

The tours are arranged so that Fordham professors can delve deep into their subjects of expertise. Following Rowe’s tour are tours of the newly opened galleries of the Art of the Arab Lands, Turkey, Iran, Central Asia, and Later South Asia; a tour of the special exhibition “Byzantium and Islam: Age of Transition;” and tours of the Baroque, 19th Century, and Modern Art galleries. Tours last about an hour, and participants are free to explore the rest of the museum afterward.

Lauren Castagna, associate coordinator of group services at the Met, said the 19th-century paintings and Egyptian art are the largest draws at the museum.

Isaak said the Met is unusual not only because of its staggering collection, but also because, unlike museums such as the Museum of Modern Art, it is willing to lower its admission price, and allow outside guides to conduct tours.

“It’s a pretty amazing place. The fact that they let us do this is a very clear indication of how democratically it thinks of its agenda, and I think that’s very important,” she said. “The Met just has the best collection we’re going to get in America, in any field you want to go to.”