skip to main content
Return to Fordham University
You are at:Home»Arts and Culture»Annual Gala Raises $500,000 for WFUV 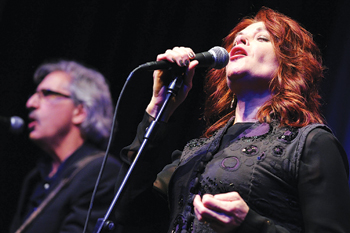 WFUV honored singer-songwriter and Grammy winner Rosanne Cash at its sixth annual fundraiser on May 9. Cash performed with her band for 300 guests.
Photo by Chris Taggart

“rock and roots” station, which broadcasts from Keating Hall on the Rose Hill campus.

A Grammy-winning artist and author of a critically acclaimed memoir, Cash spoke warmly about WFUV’s support upon receiving the 2013 Artist of the Year Award.

“[It’s great] to know that my favorite radio station likes me back!” she said. The daughter of Johnny Cash also praised the station for playing an eclectic mix of artists.

“It moves me to know that between Miles Davis and Bill Monroe and Patsy Cline and Buffalo Springfield, there’s a place for me.” 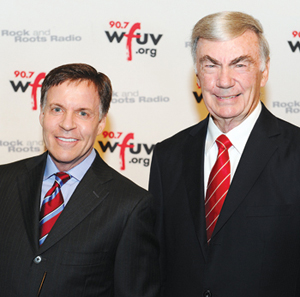 Cash and her band treated more than 300 guests to a rousing performance at the gala’s close, with ballads and foot-stomping numbers like “Radio Operator,” about her father’s Army service in Germany and his longing for her mother back in San Antonio.

On hand to celebrate were special guests Suzanne Vega, Marc Cohn and Elizabeth Vargas, Pete and Maura Kennedy (of the group The Kennedys), Garland Jeffreys, and Southside Johnny. The evening was filled with accolades for the station, which not only champions talented new artists, but also provides a training ground in news, sports, and music broadcasting for about 80 Fordham students each year.

“WFUV is New York’s most interesting, most creative radio station, hands down,” said Joseph M. McShane, S.J., president of Fordham. “Tonight is very ecumenical for us,” he joked, noting that Fordham and FUV, two Bronx institutions, were celebrating Costas, a man from Queens, and Donaldson, who is from Texas. He called them both men of “extraordinary insight and courage.”

Presenting Donaldson with the Charles Osgood Lifetime Achievement Award in Broadcast Journalism was Osgood himself, a 1954 Fordham graduate. “[Donaldson’s] fellow news broadcasters regard him as one of the best ever,” said Osgood, host of CBS Sunday Morning and an FUV alumnus.

In accepting the award, Donaldson reminisced about his decades-long career which included coverage of the Vietnam War and the White House. “When we started it was so much simpler,” said the 46-year ABC News veteran, yet he praised today’s “tough” broadcasters and the technology that allows them to deliver the news almost immediately.

“To receive an award with Vin Scully’s name attached to it is really pretty much the pinnacle,” said Costas, who kept the audience rapt by dramatically reading from the transcript of Scully’s call of Dodger Sandy Koufax’s perfect game in 1965.

Emceed by WFUV’s DJs, including Program Director Rita Houston and Morning Host Corny O’Connell, LAW ’91, the evening included a cocktail hour, an opening performance by musician Alejandro Escovedo, and a live auction. Guests bid on a songwriting lesson from Cash, a private concert with the band The Lone Bellow, and a meet-and-greet with Costas at a New York Giants game, among other items.