To any other academic, Lexi Lord had made it. Just one year out of graduate school, the newly minted PhD landed a tenure-track position in British history at a state university.

Yet she was deeply unhappy.

Lord, who loved museums and thriving metropolises, found herself living in Bozeman, Montana 14 hours from the nearest major city and unable to afford a car on her assistant professor salary.

“One thing graduate students don’t do enough is think about themselves as a whole person—what do you want? What kinds of sacrifices are you willing to make to be an academic?” Lord told a group of master’s and doctoral students at the Graduate School of Arts and Sciences (GSAS) on March 24.

After two years in Montana, Lord committed what many consider to be “academic suicide.” She left her tenure-track position and took a visiting professorship at the State University of New York at New Paltz to start fresh on the east coast. Two years later, she left academia altogether. 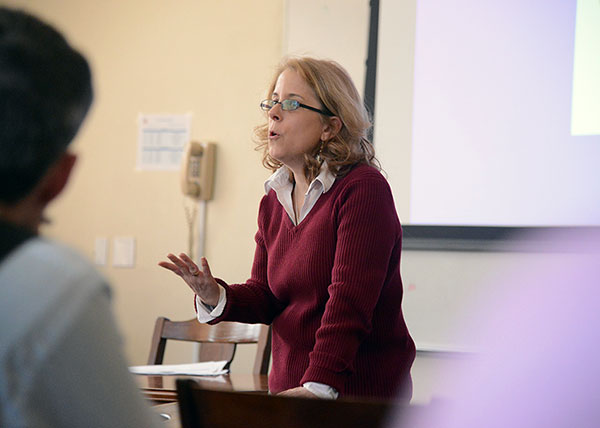 Lexi Lord left academia and now works as a historian for the government.
Photo by Joanna Mercuri

Lord, who is now the chair and curator of the Division of Medicine and Science at the Smithsonian’s National Museum of American History, said that her situation is not uncommon among graduate students. Within her own field of history, a mere 30 percent of PhD holders both obtain and remain in tenure track positions.

Many students mistakenly believe that the only outcome of graduate education—particularly at the doctoral level—is academia, Lord said. If these students do manage to secure tenure-track positions at universities (an arduous task in itself) but then realize they aren’t keen on the often-nomadic academic lifestyle, they may be left feeling trapped and disenchanted.

“It takes an average of eight to nine years to complete a PhD,” Lord said. “That’s a long time. Most people enter graduate school in their twenties, which is a time of incredible change… It’s not surprising that so many people change their minds.”

Lord is a strong advocate for what many in higher education call “alt-ac,” or “alternative academic” careers—jobs outside of the conventional tenure-track professorship. However, she disagrees with the view that these jobs are somehow unconventional or merely the post-doctoral “Plan B.”

“There are all sorts of terms batted around for PhDs who leave the academy, for instance ‘Alt Ac’ or non-academic. But what bothers me about those terms is that they always define themselves against the tenure track.

“I don’t see my career as an alternative to something I ‘should’ have been doing,” said Lord, who has also worked as a historian for the U.S. Public Health Service and as the branch chief for the National Historic Landmarks Program of the National Park Service.

She urged the students to explore opportunities in libraries, historical societies, archives, museums, and more in addition to considering academia. The federal government is an especially favorable option for those with PhDs and has long been the largest employer of PhD holders in the United States, she said.

Moreover, these jobs allow graduates to factor in their personal wishes, such as where they want to live and whether they want a nine-to-five job.

A career for the whole person

Regardless of whether students choose the academic route, they can take certain actions now to keep all doors open, Lord said—for instance, writing for non-academic as well as academic outlets and conducting “informational interviews” with organizations to learn more about careers in these fields.

Most importantly, she said, think outside the box.

“In the academy, we get hung up on specialization, or thinking that X field hires only X type of person,” she said. “[In fact,] jobs hire people from all sorts of fields and backgrounds. You can remarket yourself in a way that you can’t do in academia.”

The event was sponsored by GSAS Futures, a professional-development initiative that prepares GSAS students for careers after graduation.