skip to main content
Return to Fordham University
You are at:Home»Arts and Culture»Alan Alda to Receive Common Wealth Award for Dramatic Arts

Alan Alda, FCRH ’56, will be honored for his lifetime achievements in film, television, and theater this month at the 34th Annual Common Wealth Awards of Distinguished Service.

The celebrated actor is set to receive the 2013 Common Wealth Award for the Dramatic Arts on April 20 at the Hotel du Pont in Wilmington, Del., in a ceremony hosted by the PNC Financial Services Group. 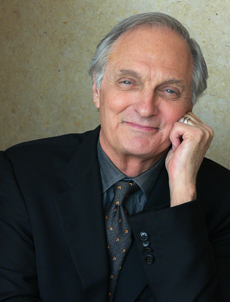 A six-time Emmy and Golden Globe award winner who was inducted into Fordham’s Hall of Honor in October, Alda will always be remembered as the beloved and cocky Captain Hawkeye Pierce of M*A*S*H—consistently rated one of the greatest television characters of all time. He went on to star in several lauded films, plays, and television shows, earning an Academy Award nomination for his performance in The Aviator and a Tony nomination for Glengarry Glen Ross. He is also the author of two bestselling memoirs.

Some of his earliest acting experiences were during his junior year as a Fordham English major studying in Europe, where he performed on stage in Rome and on Amsterdam television alongside his father, veteran actor Robert Alda.

The Bronx native also indulges his passion for science, having hosted two acclaimed PBS science programs and helped to found the Center for Communicating Science at Stony Brook University, where he uses improvisation techniques to help scientists communicate. “[T]hey have to be able to explain to their mothers what they do for a living,” he once said.

Alda will be joined by three other cultural luminaries in receiving a 2013 Common Wealth Award. David McCullough, preeminent author and historian, will be recognized for his contributions to literature; Jane Pauley, leading journalist and Today show contributor, will be honored for her work in mass communications; and Martin Sheen, film legend and social activist, will receive the award for public service. Prior winners include Archbishop Desmond Tutu, statesman Henry Kissinger, and authors Gabriel Garcia Marquez and Toni Morrison.

Granted by the Ralph Hayes Common Wealth Foundation, which is administered by PNC, the awards recognize individuals who have enriched society in a range of human endeavors. They were first presented in 1979.