skip to main content
Return to Fordham University
You are at:Home»Arts and Culture»Ailey Program Pairs Fordham Dancers with Emerging Choreographers 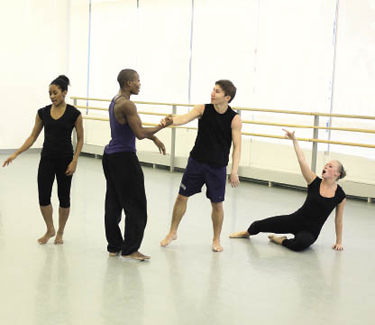 A new program at the Alvin Ailey Dance Studio has Ailey-Fordham students moving in new directions—literally and figuratively.

Recently, three Fordham students were given the opportunity to help up-and-coming choreographer Camille Brown actualize a dance-in-progress that she said was partly inspired by depictions of African Americans in a Subway sandwich commercial.

Fordham College at Lincoln Center sophomores Patrick Coker, Rachel Secrest and Jacquelin Harris were part of an ensemble that performed the three-part piece last semester at the Joan Weill Center for Dance on West 55th Street.

The student dancers collaborated with Brown on interpreting her vision of the history of African-American humor, its bald stereotyping and its use of caricature in minstrel shows and other venues.

Students were taught the choreography, which merged stereotypical movement, clichéd vocal riffs and vigorous modern dance steps, over a period of five weeks. During that time, they were encouraged to bring their own artistic expression to their dance, they said.

Secrest, a double major in dance and political science, said that the piece changed considerably from where it started. She valued the opportunity that NDCL had given her to go deeper into dance performance: Working with a choreographer on an emerging piece, she said, took her well “beyond technique.” 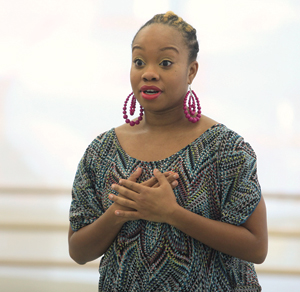 “It was really interesting to interpret, and hard,” Secrest said. “It was different from the normal Ailey training because this was a chance for us to build on our own artistry, which is important if you are working toward being a professional dancer.”

Sophomore Jacquelin Harris said that the topic made her think about how movement related to the creation of character.

“There is a symbolism behind each step,” she said. “[It] caused me to be more than just a dancer, but also an actor.”

“This gave me the opportunity to work intensively to figure out what I am doing with the new piece,” she said. “It was amazing to have a creative playground.”

NDCL plans to support two new emerging choreographers every semester, offering Ailey-Fordham students a chance to stage cutting-edge choreography while earning their degrees. Students must try out at the beginning of each term for the choreographic labs. Those chosen are given credit for their participation.