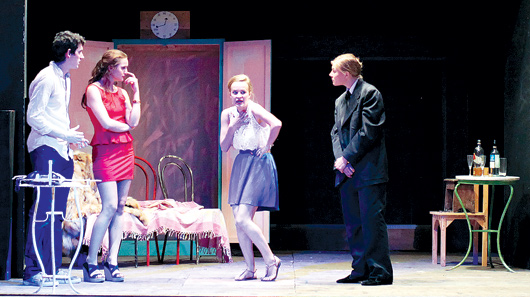 As a part of Fordham’s summer study abroad program, seven theater students traveled to Italy and met Nobel Prize-winning playwright Dario Fo before performing one of his renowned plays.

The performance was the culmination of the students’ Acting in Italian course, co-taught by Joseph Perricone, Ph.D., professor of Italian and comparative literature, and Matthew Maguire, director of the Fordham Theatre Program.

Fo won the 1997 Nobel Prize in Literature for his use of comedy to highlight injustice. Thanks to the remarkable diplomacy of Perricone, Fo invited the students to his home prior to their performance ofNon Tutti I Ladri Vengono per Nuocere (Not All Thieves Come to Harm You), a farce that explores what a poor thief discovers when he is trapped in the world of the rich.

Maguire said that Fo helped the performers understand his play’s layers. “It was inspiring,” he said. “Dario speaks only in Italian, but with great clarity, investing every moment of the story with its precise weight.”

“Meeting Dario was like meeting a rock star,” said Patrick Fleury, FCLC ’12. “At the end of the visit, he gave each of us a signed lithograph from his current exhibition. By the end, almost all of us were in tears.”

For FCLC senior Anna Crivelli, meeting Fo was every bit as nerve-racking as it was exciting.

“It overwhelmed me at first—the fact that he was a Nobel Prize winner and our playwright,” said Crivelli. “But as he began explaining his intentions with the play, I realized we were being granted an unforgettable and amazing gift.”

The actors opened their performance in Orvieto on July 28 and closed in Rome on July 31, to excellent response.

“Professional actors take four weeks to rehearse a play. Our actors had only three weeks in a language that was not their own,” Maguire said, “and one of the success stories was that everybody reached the fluency needed to persuade Italian audiences they were watching Italian characters.”

Although the 86-year-old Fo could not be there for the performances, his benevolent presence could be felt, students said.

“Meeting Dario before opening night inspired us to tap into his generous spirit and to capture his voice,” Maguire said. “Having met him, we understood the play better because we saw the twinkle in his eye, and grasped his insistence of what is più importante (most important).”

For Crivelli, the experience is something that she will keep close to her in future endeavors.

“I’ve been inspired to keep up the language, and have realized the importance of understanding another culture through language,” she said.

Perricone and Maguire are eager to expand the tour’s cities for next year.

“Immersion in the culture is great for learning a language—and for acting,” Maguire said. “There’s a courage that is asked of the students; the troupe is named I Coraggiosi (The Courageous Ones). If you don’t remember your lines in English, you can improvise, but if you don’t remember in Italian, the panic can be paralyzing. One of the benefits to our actors is their realization: if you can act in Italian, you can do anything.”