skip to main content
Return to Fordham University
You are at:Home»Arts and Culture»9 Unique Things to Do in NYC over the Holidays
Holiday Nostalgia Train photo by Marc Hermann, courtesy of the New York Transit Museum
As the semester winds down, Fordham News asked historian Sharon Suchma, Ph.D., FCRH ’97, a lecturer at the School of School of Professional and Continuing Studies’ College at 60 program, to suggest things to do in New York City over the holiday break. Suchma loosely based her suggestions on her recent fall course, “Studies in Art History: Photography, Architecture, and Human Expression,” though several of these activities have a decidedly holiday theme.

“The Merchant’s House is a neo-Greek style house. Each year they have a reading of A Christmas Carol, which Dickens wrote in the 1840s, following a visit to New York where he saw the same economic disparity he observed in London. The house looks like something he would have seen when he visited New York. He came back to America for a performance of his classic story in 1867, which took place at Steinway Hall near Union Square, which is within walking distance to the house.”

For hardcore Dickensians, the Morgan Library will have the original manuscript of A Christmas Carol on display through Jan. 6.

“Celebrating the solstice goes back to the Paleolithic era and Saint John the Divine is the wonderful place to be for this kind of event. It’s considered the largest cathedral in the world, two football fields long, and they say it can hold the Statue of Liberty in the church’s dome. Over the years, musician Paul Winter became interested in different cultural sounds and the neo-Gothic, Romanesque Revival space is the perfect environment for this performance. Whatever the genre, the joy is that they use the acoustics of the space with a wide array of instruments, western and nonwestern, from gongs to drums to organs and guitars. For the first time in seven years, the show actually happens on the weekend of the solstice (5:23 p.m. EST on Dec. 21), which is worth experiencing once in your life.”

“Snug Harbor in Staten Island the first place to house retired merchant seamen in America. Today, with more than 50 structures on 83 acres, it’s also one of the largest adaptive reuse sites. There’s a museum dedicated to the artist John Noble who lived in a houseboat, painting southern Manhattan. Noble’s houseboat is also on display. But this time of year, the thing to see is the Lantern Festival in the Chinese Scholar’s Garden. It is one of two authentic scholar’s gardens in the U.S. The concept was perfected in the Ming Dynasty. There must be certain types of stone, specific views, and amounts of water. The garden was to be created when you have finished your life’s civic duties and were entering retirement. The lantern festivals symbolize new birth, but this festival has brought whole new meanings, using lights sculptures and LEDs.” 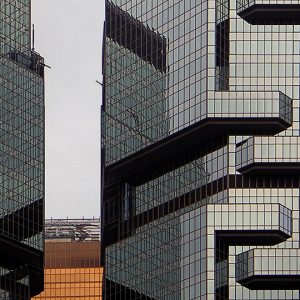 “Our class had a couple of architecture-based sessions that referred to museums that are small and under the radar. The Center for Architecture has a good Paul Rudolph show that is tiny and thorough. Rudolph was an architect and historian known for Brutalism in America. There are a lot of the architect’s drawings, sketches, and renderings that were previously unseen. The hip-hop show looks at the skin of architecture and explores elements of street art and graffiti. It also examines how decay has become ‘sexy.’”

“The skyscraper museum’s space is designed by Skidmore, Owings, and Merrill, the dominating firm that created some of the world’s best-known skyscrapers. They built the world’s tallest building in Dubai, the Burj Khalifa, which is 1,000 feet taller than One World Trade, which was also designed by them. The space, by contrast, is very intimate. They always have dynamic shows with really great models. Right now, there’s an exhibition that explores the history of the Manhattan skyline.”

National Museum of the American Indian at the Alexander Hamilton U.S. Custom House
One Bowling Green

“Right around the corner from the Skyscraper Museum is one of my favorite buildings, The Alexander Hamilton Custom House. It was designed by Cass Gilbert, the same architect who designed the Woolworth building. It’s a wonderful Beaux Arts example of the City Beautiful movement, which championed municipal buildings that looked grandiose in the European tradition, with the thinking that the people would be inspired to be better citizens. Inside, the first three floors are taken up by the Museum of the American Indian, which is free! It’s a wonderful museum and there’s a great WPA-era ceiling mural by Reginald Marsh, a disciple of the Ashcan School of painters. It shows the port of New York and the transfer of goods, including a really cool 1930s car. But the real gem is the building exterior, which at the top features figures from Greek mythology, waves, and whales and at the bottom features four sculptures by Daniel Chester French that depict the continents of Africa, Asia, the Americas, and Europe. They should be viewed with an understanding of the time they were created, where Asia is represented with a vague Orientalist theme, Africa is mysterious, Europe is crowned in glory, and America is represented as a young woman.”

Church of the Intercession and Trinity Church Cemetery of Upper Manhattan
155th St. and Broadway 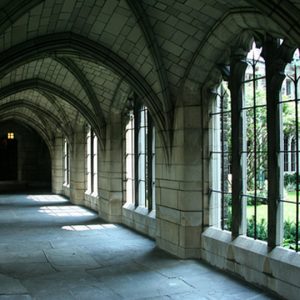 The cloister at the Church of the Intersession.

Besides being the final resting place of John James Audubon, and more recently former New York City Mayor Ed Koch, Trinity Cemetery also holds the tomb of Clement Clark Moore, author of the poem “A Visit from Saint Nicholas,” which begins with the famous line, “’Twas the night before Christmas…” At the center of the cemetery sits the Church of the Intercession.

“It is an English perpendicular style church, a type of English Gothic which is distinguished from the French Gothic for its emphasis on horizontal rather than vertical. Inside, the choir loft has German styled woodwork. There’s also a crypt chapel that you need to make an appointment to see. Outside in the back of the church is a beautiful cloister and a lovely Celtic cross memorializing Audubon, on whose former estate the church was built. The cross has carvings on it of the animals Audobon loved. And while you’re up there you might as well go to the Cloisters, which is decorated beautifully for the holidays.”

“This Sunday and next, the Transit Museum, a 1930s subway stop and underground museum in Downtown Brooklyn, runs a fantastic holiday nostalgia ride. So, for the price of a metro card, you can ride a 1930s-train car from Second Avenue to 125th Street. For the really ambitious, they also run vintage of buses along 42nd Street.”

The Holiday Train Show at the New York Botanical Gardens
Through Jan. 21

While on the subject of trains, we’d be remiss to not mention our neighbor and Bronx Science Consortium partner, The New York Botanical Gardens…

“The train show is extraordinary, displaying both beautiful model trains and reconstructions of NYC monuments and neighborhoods. All the landmarks are made from organic botanical material. There is even a Coney Island display that includes the famous rides the Cyclone and the Wonder Wheel, both of which are continuously running. As for the gardens themselves, I would recommend bundling up and walking through the paths in the forest, as it is one of the few actual original, uncut terrains of plants and trees in NYC. The gardens also have several different conifer gardens, which all look like a winter wonderland during this season. There also are places to grab a hot chocolate and relax and warm up.”