skip to main content
Return to Fordham University
You are at:Home»Arts and Culture»Poet Marie Ponsot Given Lifetime Achievement Award
Photo by B.A. Van Sise
On Oct. 20, the Francis and Ann Curran Center for American Catholic Studies presented a Lifetime Achievement Award to 96-year-old Catholic poet Marie Ponsot. The author of seven collections of poetry was on hand to accept the award, co-presented by the center’s associate director Angela Alaimo O’Donnell and by Kim Bridgford, editor and founder of Mezzo Cammin.
Keep up on campus happenings
Subscribe to our e-weekly Fordham News
O’Donnell called Ponsot’s life “a long and generous one,” and characterized her work as “an amalgam of fierce intelligence and courtly grace.”

“Hers is a confident, yet compassionate voice that speaks from an unabashedly feminine perspective,” she said.

An accomplished teacher and scholar, Ponsot has translated 40 books from French into English, written radio and TV scripts, and taught students at Queens College, The New School, Columbia University, the 92nd Street Y, Poets House, and other venues.

As a young woman, O’Donnell said, the native New Yorker moved to Paris after earning a master’s degree from Columbia. On the boat voyage over, she met poet Lawrence Ferlinghetti—a meeting which led to the publication of her first book, True Minds, as part of his City Lights series, in the 1950s. 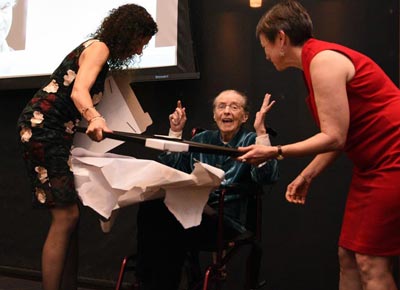 Ponsot did not seek to publish her second book, Admit Impediment, for some 24 years as she raised seven children, said O’Donnell. Remarking on this unpublished period of her life, Ponsot wrote: “You don’t wait for someone to approve. If you go on doing it and enjoying it, well what have you done? You’ve spent time enjoying what your language makes of you. Very often this makes for a more comfortable self than any other you’ll ever meet.”

Speaking softly to a large audience gathered in the Corrigan Conference center, Ponsot exclaimed “it’s exciting” to receive the award and to be given an opportunity to read portions of her poetry. She was subsequently presented with a plaque and a collage of her published book covers, to which she threw up her arms delightedly.

The recipient of several poetry awards, Ponsot has also published two books on the pedagogy of writing, and, in 2010, was elected a chancellor of the Academy of American Poets.

The event was co-sponsored by the Mezzo Cammin Women poets Timeline.