skip to main content
Return to Fordham University
You are at:Home»Arts and Culture»Fordham Theatre Dares to Ponder Life After War 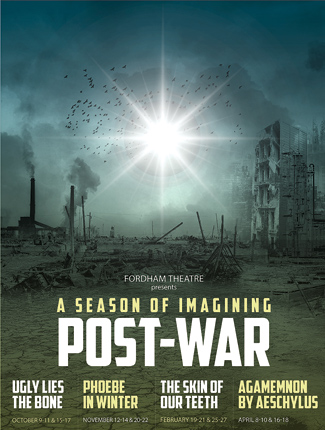 “I don’t think that fish understand that they swim in water. It’s just their reality.”

The same is true for Americans who don’t realize they’ve lived their lives in a state of perpetual war, said Matthew Maguire, director of the Fordham Theatre Program.

This season, Fordham Theatre’s mainstage season tackles a concept that is radical, given the fact that the United States has been in armed conflict for most of its 238-year existence: What happens when war ends.

“There was a brief window when we were out of Iraq and it looked like we were going to be getting out of Afghanistan by the end of 2014,” Maguire said. “If that had happened, we might have no longer been at war.

“I was staggered by the possibility. In talking with students last year, I asked them, ‘It seems like we’ve been in a perpetual state of war. Can we even imagine what it would be like if we weren’t?’”

The season kicks off on Oct. 9 with Ugly Lies the Bone by Lindsey Ferrentino. The play, which is also running Oct. 15-17, is a contemporary story about a veteran who returns to her home in Florida with burns over 80 percent of her body.

It will be followed in November by Phoebe In Winter by Jen Silverman, Thornton Wilder’s Skin of Our Teeth in February, and the classic Greek tragedy Agamemnon, by Aeschylus, to close out the season in April.

The plays are presented backwards chronologically. Jenny Slattery, associate director of Fordham theatre, noted that even factoring for the gulf of time (Agamemnon was written in the fifth century B.C.), the same questions about war, family, and identity arise over and over.

“The question of home and whether you can come home is such a multifaceted question,” she said.

Maguire said the plays aren’t anti-war in a traditional sense; rather, they illustrate the complex struggles that even victors face when they leave the battlefield.

Slattery is concerned with the way that modern-day war permeates life far from the battlefield, via mediums like Youtube and Twitter. Add to that the fact that today’s Fordham freshmen were in kindergarten during the 9/11 attacks, and you have a generation that—like the fish in water—has never known a time when the nation hasn’t been at war.

“It’s hard to imagine ‘post-war’ when you’ve lost your ability to even define and contain war. If we don’t know where war starts and stops, it’s hard to know what’s beyond it,” she said.