skip to main content
Return to Fordham University
You are at:Home»Arts and Culture»16th-Century Book by Anti-Machiavellian Jesuit Gifted to University
The Longhi family present the 1599 book to Father McShane and University staff. (Photos by Dana Maxson)
Although a 16th-century philosopher and statesman, Florentine Niccolò Machiavelli became widely associated with political scheming and backstabbing due to his most famous book, The Prince. The treatise outlined cunning and duplicitous ways to achieve political power and spurred a wave of anti-Machiavellian writings, including those of Spanish Jesuit Pedro de Ribadeneira, S.J. 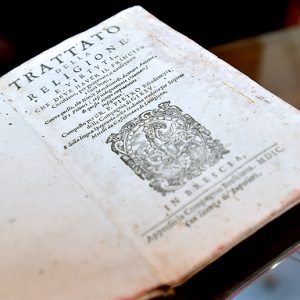 “Today, people talk about virtues in business—and they are all here in this Jesuit’s book,” said Longhi. “Entrepreneurs, bankers, and managers today must be able to show Christian virtues, so that people can follow leaders who behave correctly.”

Longhi said he decided to donate the book after meeting Henry Schwalbenberg, Ph.D., director of the graduate program in International Political Economy and Development, and Michael C. McCarthy, S.J., vice president for Mission Integration and Planning. The three attended conferences at the Vatican and at Fordham which focused on ethics in business, government, and economics.

“It’s an excellent text, a witness to a long tradition of anti-Machiavellian thinking,” said Alessandro Polcri, Ph.D., associate professor of Italian who specializes in 14th- and 15th-century Italian literature. “Machiavelli was criticized as a person who didn’t defend Christian virtues and promoted an approach to life with no moral limits.” 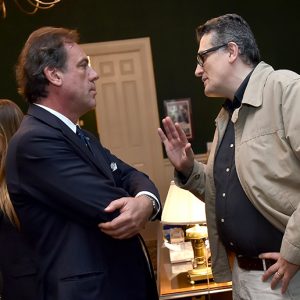 Polcri described Father Ribadeneira as a multilingual intellectual best known for his biography of St. Ignatius, Life of Loyola. He said that Father Ribadeneira’s criticism of Machiavelli in his native Spanish was published in 1595. The 1599 copy given to Fordham is a first edition translated “in beautiful Italian”—of which there are only 35 known copies in existence.

“De Ribadeniera’s book is a strong statement about how to use religion and the veneration of God in the act of governing and politics,” said Polcri.

In addition to igniting interest in critical texts surrounding The Prince, the gift could also reignite interest in “a figure who is a fundamental Jesuit,” said Polcri.

“Few at Fordham knew of Father Ribadeneira outside of his Loyola biography,” he said. “Now there’s more to explore.”

Polcri said that original sources in a digital age have become increasingly important as teaching tools. “In the digital era, students study the past as if it’s something abstract. Manuscript and printed material from that period is fascinating for students even if it is not easily readable. It has its own characteristics.

“But print is a great opportunity for them to understand the changes over the centuries. They can see the materiality and realize the transmission of the texts in that time,” he said. “When I teach Machiavelli, I will take them to the library to see this.”